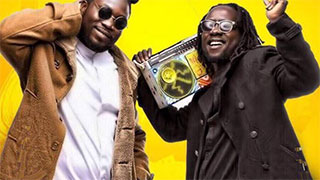 Ghanaian music duo Wutah has fulfilled its promise to reunite as a group by releasing their first single, after eight (8) years of doing their solo projects.

A few weeks ago, there were videos on the social media pages of the members of the group, announcing their reunion.

When the news broke, most people thought it was a hoax or merely a stunt to promote a one-off project. However, the PR and Communications Director Nana Kojo Afreh assured Citi Showbiz that the two musicians, Wutah Kobby (Daniel Morris) and Afriyie (Frank Osei) had reunited for good.

“They are united to do music so people should be happy,” he said.

The new song, ‘AK 47,’ which was produced by Ceedigh is has a groovy beat and a style that brings back memories of the old Wutah. For those who really miss Wutah as a group, you just got served a good treat with ‘AK47.’

Wutah came into the limelight in 2004 when it contested for the Nescafe Africa Revelation music competition in Accra and came second to Praye. The name Wutah is a Hausa word which means fire.

Their debut album, ‘Anamontuo’ which has songs like ‘Adonko’, ‘Goosie Gander’ and ‘Big Dreams’ earned them eleven nominations including The Most Popular Song of the Year, Album Of the Year and Artiste of the Year in the Vodafone Ghana Music Awards.

In 2009, they separated and started recording their solo projects. Afriyie has released song like ‘I Do,’ ‘Love of My Life,’ ‘Tontonti,’ ‘Everlasting Love’ and ‘Here to Stay.’ Kobby also has songs like ‘Chiochio,’ ‘Pii Por Pii,’ ‘Warning,’ and ‘Father for All.’